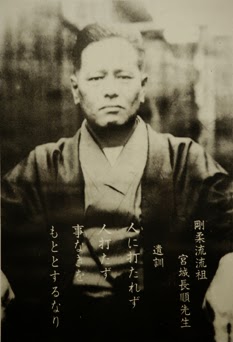 Chojun Miyagi became a student of Kanryo Higaonna at the age of 14 in 1902 when the latter was 49 years old. In the beginning he was given tasks such as weeding or cleaning while Higaonna observed his character in the traditional manner. When he eventually began training, Miyagi showed such enthusiasm and determination that even being limited to only the severe Hojo undo and Sanchin training did not deter him. In fact, he supplemented the training with additional running and power training of his own, stopping to lift big stones as he ran home from school. A natural athlete, Miyagi excelled in every sport and physical activity he attempted and Karate was no exception.

Miyagi was the only student of Higaonna to be taught all of the kata that had been passed down from Ryu Ryu Ko. With the exception of some Bo techniques however, Higaonna did not pass on his knowledge of weaponry, believing weapons to be unnecessary in peaceful Okinawa. 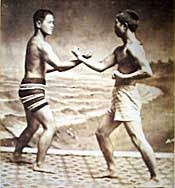 In 1915 at the age of 27, acting on a suggestion from his teacher, Miyagi and a Chinese born friend and White Crane master named Wu Xian Gui (1886-1940) and known as Gokenki in Okinawa made a trip to China. They had gone with the intention of finding Ryu Ryu Ko's and/or Wan Shin San's schools but found that everything had changed - possibly because of the Boxer rebellion of 1900.

Miyagi was introduced to an old man who professed to have been a student of Ryu Ryu Ko's and Kanryo Higaonna's junior. He told Miyagi that the art no longer existed in China. The story goes that Miyagi demonstrated his kata to the approval of the old man who commented that one kata was missing from Miyagi's system. He then proceeded to demonstrate Sanseiru. Miyagi was astonished and pleased to see that it was almost identical to the version he had been taught. He had merely not performed it because it was his least favourite.

Although they visited several masters, they could not find anyone teaching Ryu Ryu Ko's art. The places where Ryu Ryu Ko and Wan Shin San had lived and trained either no longer existed or were occupied by new tenants who were unable to provide any useful information. They did find Ryu Ryu Ko's grave and, after paying their respects, Miyagi recorded the inscription on the tombstone which was quite detailed as is the custom in China. They also visited the ruins of the Shaolin temple where it was believed that Ryu Ryu Ko had learned his art. 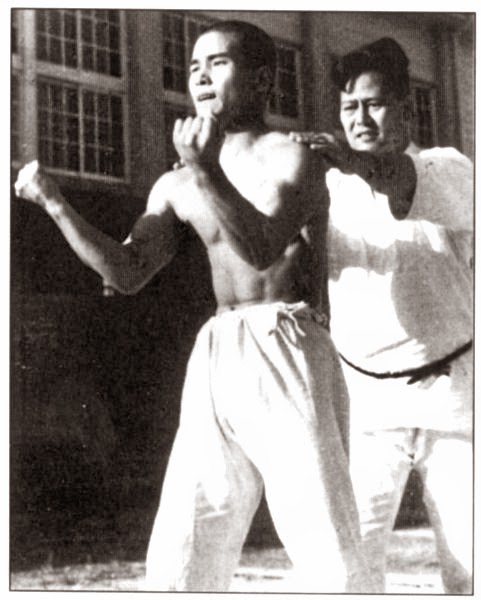 After approximately one year, Miyagi and Gokenki returned to Okinawa. Not long after that Kanryo Higaonna died and Miyagi as his successor began to take on students. At around this time, Miyagi researched, developed and introduced a a kata he called Tensho (literally: "revolving palms"). Some say that he developed this kata by adapting the arm movements of a White Crane kata called Rokkishu and utilizing the same stepping as Sanchin kata.  A more detailed analysis of the inspiration for the form can be found here.
There is also some conjecture about whether Miyagi also introduced the kata Saifa, Seiunchin, Shisochin, Seipai and Kururunfa.  There is even speculation as to whether he learned Sanseiru from Kanryo Higaonna or from some other source.


Miyagi also developed a set of warm-up and conditioning exercises he called Yobi undo (also known as Junbi undo in Japanese). These were developed with a view to preventing injury and developing optimum health in a student while assisting with the development of technique. 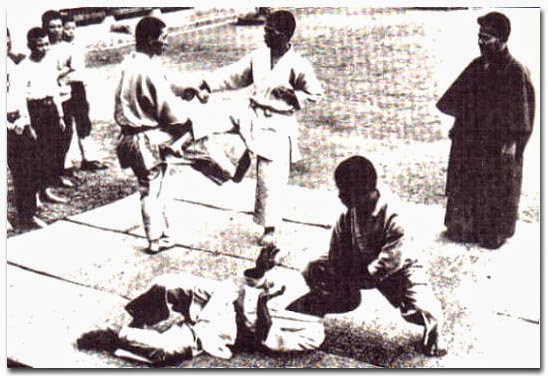 Teaching karate to a large group for the first time probably inspired the development of Yobi Undo and also to the establishment of a teaching curriculum neither of which existed in other styles. For the first time all of the kata were taught in a particular order. In the past, training would start with hojo undo (power training), basic punching and blocking techniques, ude tanren (forearm conditioning), yakusoku kumite (pre-arranged sparring), kakie and then Sanchin kata. Those students that had been training more than three to five years would then be taught one or two kata that it was felt suited their physique. Now the longer a student stayed the more kata he would learn.

In 1926, Chojun Miyagi approached a number of other Tode/Karate masters with a view to gaining their cooperation to start a club where a number of styles could be taught for the mutual benefit of all and the preservation of Karate as an Okinawan cultural treasure. This resulted in the formation of the Karate Kenkyu Club with classes being taught by the following Shihans: Chojun Miyagi, Chomo Hanashiro, Choyu Motobe of Shorin-ryu and Kenwa Mabuni (later the founder of Shito-ryu in1937).

This appears to have been the first proper Karate dojo, both in the sense that it had a building dedicated for use as a training hall and in that it involved fee paying students that could "come in off the street". The dojo was constructed by obtaining a loan from the bank with Miyagi's good friend Gokenki acting as a guarantor to the loan. Training was held everyday but Sunday and many guest instructors were invited to teach at the dojo including Gokenki who often came to teach and demonstrate his art of White Crane. Unfortunately the club struggled to break even and was disbanded in 1929.

The naming of goju ryu


In 1929, after a demonstration at a martial arts festival in Japan, Chojun Miyagi's top student Ji'an Shinzato was asked what style of karate he practised. At a loss for a reply he described it as Hanko or half hard. Shinzato later posed the question to Miyagi who gave the matter much thought. Given the nature of the techniques contained within the art he eventually decided to name his style Goju-ryu (the "hard-soft" style) after a line in the classic martial text Bubishi.

Sometime between 1920 and 1930, Miyagi made a second trip to China. The reason for the trip was two-fold: to further research into the martial arts and so that Gokenki (who was a businessman) could buy a bulk quantity of tea for re-sale in Okinawa. They stayed for about one month but did not learn anything new.


In 1931 Master Miyagi followed up on his top student Ji'an Shinzato's 1929 visit to the Japanese mainland by himself travelling there on a teaching visit. By this time karate's popularity had grown in Japan and in particular had found a large following in that country's universities mainly as a result of fellow Okinawan Gichin Funakoshi's efforts. As such Chojun Miyagi visited a number of universities to instruct the karate students there. At Retsumeikan University in Kyoto one of these students was Jitsumi (later known as "Gogen") Yamaguchi who was to go on to to become the leader of Goju-ryu on the Japanese mainland and who created the large Japan-based organisation known as the Goju-Kai.


In 1934, Miyagi accepted an invitation to make a training visit to Hawaii to teach Karate to the large Okinawan and Japanese community there. He stayed for nearly a year and for the first time in history brought knowledge of Karate into the Western world - reportedly even having had a few Americans in his classes.


Shortly after his return to Okinawa, in early 1936 Miyagi made another trip to China again accompanied by his old friend Gokenki. This time he visited Shanghai where he performed a demonstration in front of two hundred Japanese nationals at the Japanese club. Miyagi managed to obtain five books on Chinese Boxing which he intended to translate.

The development of Gekisai dai ichi and ni 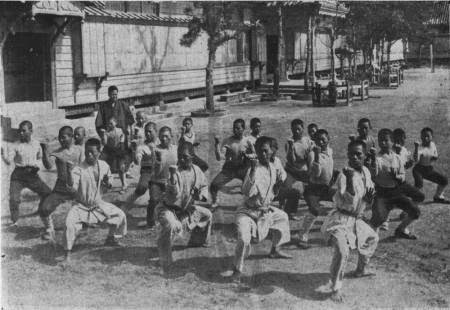 In 1940, Chojun Miyagi developed a Kata which was initially called Fukyugata-ni and was intended to supplement a kata named Fukyugata ichi developed by a Shorin master named Shoshin Nagamine at the request of the Karate-do special committee. At this time Japan was entrenched in a war with China and on the brink of entering World War II. Schools and military and police authorities were already using Anko Itosu's Pinan kata as Itosu had intended way back at the beginning of the century and were now looking at even more "introductory" kata.  The requirements were for a simple but aggressive kata to bolster the spirit and fighting ability of the younger generation. Miyagi responded with a kata that accomplished this even to the extent that for the first time in a kata the finishing move was a step forward. Miyagi felt that this would portray a boldness that was required in the difficult times ahead. Later he renamed the kata Gekisai (literally: to "defeat by smashing") and later still developed a second variation - renaming the kata(s) Gekisai dai ichi and Gekisai dai ni ("Gekisai number one and two") using them to teach beginners.

The Second World War cost Miyagi dearly. Along with all of his books, manuscripts and other boxing relics lost in bombing raids during the battle of Okinawa, he had lost three of his children and many of his students. His best student and his likely successor Ji'an Shinzato was killed at age 44 when his unit, fighting in the defence of Okinawa, was hit by cluster bombs dropped by an American fighter-plane. Despite all of this, Miyagi resumed teaching after the War and died in 1953 aged 65 - many attributed his early death of a heart attack to the emotional stress of losing so many dear to him.


The martial art of Okinawan Goju-ryu as developed by Chojun Miyagi, is a true combat art, not at all suited to modern day sport karate competition. Instead, goju-ryu is a counter-attacking system based on a synthesis of hard linear type techniques with softer circular movements. Goju-ryu's circular blocking actions and evasive body movements not only deflect and/or absorb an opponent's energy but serve to wind up the body like a spring so as to unleash explosive counter-attacks. These can take the form of a series of strikes beginning with kicks, followed by groin and joint kicks, foot-sweeps, stamps, punches, a variety of open hand strikes and finishing with knee and elbow strikes, rips, tears, gouges and headbutts. Gripping, pulling, pushing, jamming and joint-lock techniques are also included, as are throws.
Chojun Miyagi, and the masters who had passed the art to him, knew that no matter how good the fighter the chances are that, sooner or later, he/she will get hit during combat. Thus the age-old Shaolin tradition of "iron shirt" body conditioning is embodied in Sanchin kata, to toughen the body against strikes and increase tolerance to blows.
From a philosophical point of view Chojun Miyagi chose the name goju-ryu ("hard-soft" style) to mirrors the concept of the yin-yang and to provide a guide to the performance of the techniques. Here are some examples of his teachings: 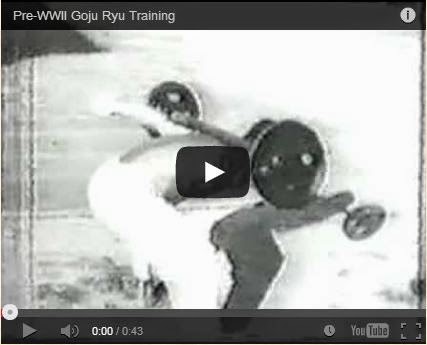 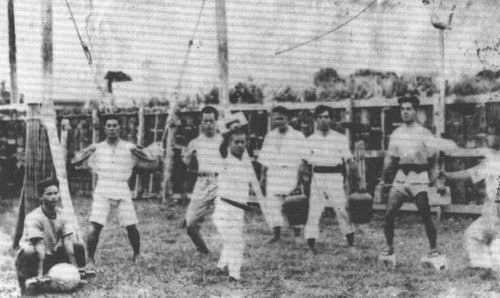 A few weeks after the passing of the Master Miyagi the question of a sucessor began to arise and in this regard his senior students held a meeting to discuss the matter. Present at this meeting were Genkai Nakaima, Seiko Kina, Meitoku Yagi, Jitsui Yogi, Ei'ichi Miyazato and Koshin Iha. Nakaima suggested that Seiko Higa, as the most senior student should assume the leadership role but Ei'ichi Miyazato claimed that Miyagi Sensei had named him as successor. The meeting ended without agreement being made. Sometime later, Miyagi's widow, together with daughter Yasuko, visited those seniors that had opposed Miyazato's appointment to the leadership role and asked for their support in passing on responsibility for the dojo to Miyazato Sensei.

Thus, in 1954 after a requisite period of mourning and at the request of Miyagi's family, Ei'ichi Miyazato took up the responsibility running classes in Miyagi's garden dojo. There was however much disagreement over how Goju-ryu should be taught after Miyagi's death and debate continues to the present day.

Next: Lineage of the Academy