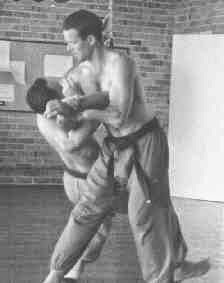 Tuide (or Tuidi) means grappling in the Okinawan language. Within the bunkai (applications) of karate kata, there are many grabbing, joint-locking, immobilizing and throwing techniques. Traditionally these were taught alongside the atemi waza (striking techniques) of karate in the same way as qin-na  (which literally means "seizing and controlling" in Mandarin) techniques have always been taught as complementary techniques to the striking applications of the various "external" or "hard" styles known generically as "kung-fu".

As the Okinawan Karate we teach is essentially a "cousin" of these systems, the Academy follows this tradition and teaches the grappling, throwing and immobilising techniques contained within the karate katas.

Accordingly the syllabus includes a tuide lock-flow drill for each kata.  These locks are then applied in free sparring, both standing and on the ground.

In addition to the grappling applications of the kata, the Academy teaches two specific qin-na (Chinese locking/throwing) forms known as "touxing" or ("nagegata" in Japanese).

The role of grappling in the Academy's syllabus

The Principals of the Academy of Traditional Fighting Arts, Kancho Nenad and Shihan Dan have developed the tuide lock-flows by combining their knowledge of both qin-na and aikido (learned over a decade of study), with an exhaustive and lengthy study of karate kata and bunkai.

In addition, the qin-na throwing forms have been refined over decades of pressure testing to reflect realistic combat throws.

But it would be a mistake to assume that the Academy featured grappling to any significant extent.  Rather, as a civilian defence oriented school, the Academy's teaching is primarily to avoid grappling engagements.

The Academy's philosophy is that striking techniques are useful in a wider variety of civilian defence situations than grappling, wrestling and throwing - however useful (indeed necessary) those throws are in the ring/cage and other one-on-one encounters.

Accordingly it is important to note that our tuide/qin-na techniques are used as an adjunct rather than as our primary fighting method especially if our assailant is larger and stronger. An old goju-ryu precept is: "grip a stronger person lightly and a weaker person strongly".

The Muidokan karate jutsu fighting method involves a series of strikes that start at long range (with weapons if available or kicks), work through the medium range (short kicks, knees, punches and a variety of open hand strikes) and finish in the close range (using elbow strikes, rips, tears, gouges, headbutts, etc), before any attempt is made to grab an opponent - be it for the purposes of controlling them, injuring them, or for a take down. 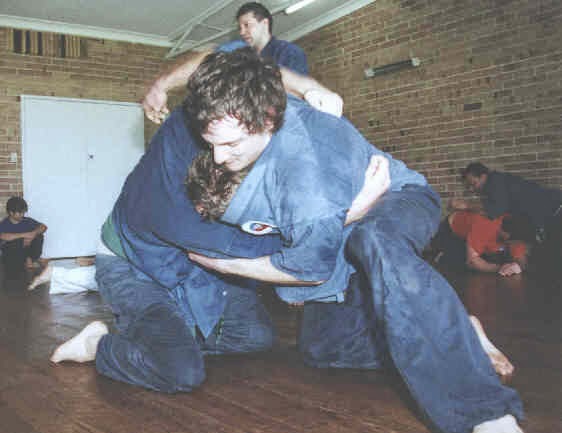 In certain circumstances an opponent can be controlled and restrained by tuide/qin-na techniques alone until help arrives. The use of tuide/qin-na techniques in this manner must out of practicality be reserved only for non-life threatening situations in which you are confident that you can ensure your own safety (unless your job as a security or law enforcement officer demands that you carry out your duty in spite of the risk).

For most self defence situations we teach that one should not remain entangled with any one attacker for longer than absolutely necessary - whether on the ground or while engaged in "stand-up" grappling. Instead, our objective is to control, throw, injure and/or immobilise an opponent just long enough to be able to either run away or, if there is no alternative, to apply a 'finishing' technique.