The philosophy behind the Wu-Wei Dao martial system

In combination wu-wei denotes a state of nothingness from which anything can arise. The practical application of this concept is to be found in the martial arts maxim mizu no kokoro or "mind like water" or in the Academy Motto: "be calm in mind and swift in action". It is vital for a martial artist to develop responses to threats that are both spontaneous and effective since there is rarely any time in combat for considered thought. It is for this reason that training in the Academy often involves continuous repetition of techniques (a process known as "grooving"). However in order to rely on the results of this training a martial artist needs to have a clear, uncluttered and focused mind; a mind that is like the waters of a still lake on which every ripple is noticed. In view of the above it is possible to read Wu-Wei Dao as "the way of action that springs from nothingness" or "the way of spontaneous action".

It is also possible to read wu-wei as "achieving a result by doing nothing". This concept expresses the Academy's philosophy of achieving a desired result without conflict or, if conflict is unavoidable, with as little conflict as possible. In this regard Wu-Wei Dao is not dissimilar in meaning from the term budo (武道) or "the martial way", since the character for bu (武) is made up of 2 elements, one being "the sword", and the other being "never to be used" . Some may find it odd that the practice of a violent activity should have what is apparently a pacifist philosophy, however underlying this "paradox of the martial arts" is the truism that conflict is best managed by being diffused. And it is by understanding our own violent nature and potential that we can best understand and manage violence in others.

Master Azato (one of the karate teachers of Gichin Funakoshi - founder of Shotokan karate) said:
"A true martial artist is one who's smile will warm the hearts of little children, and who's anger will make tigers cower in fear."

On a more immediate level the concept of "achieving a result by doing nothing" is embodied in the techniques of the Wu-Wei Dao system which are based on economy of action. This frequently takes the form of utilizing an attacker's force against him/her or moving along the "lines of least resistance". Accordingly Wu-Wei Dao has a meaning similar to Aikido which means "the way harmonizing energy", a reference to flowing with an attacker's energy rather than opposing it head on.

Lastly, it is important to note that the character wu (無) refers to the kind of "nothingness" associated with the sky and thus carries with it the connotation of infinite potential or possibility. In this regard it has the same meaning as Kara in Karate which means "empty as the sky" rather than empty in the ordinary sense of the word. It is in the context of this interpretation that we approach the wider philosophical meaning of wu-wei.
The above attempts to define wu-wei emphasize the fact that it is not capable of being described or understood by reference to a handful of words. It is an ancient and profound concept drawn principally from the Daoist (or Taoist) philosophy.

It is important at this point to draw a distinction between Daoist philosophy and the Daoist religion. The former is of indirect interest in the study of Wu-Wei Dao. The latter has no bearing whatsoever since there is no religious connotation or significance to our training.

Daoist philosophical thought has its origins in a number of ancient Chinese classical texts, the most significant being Lao Zi's Dao-De Jing or "the Way and its Power". Other texts with varying emphases and perspectives include the Juang Zi and the Lie Zi named after their respective authors.

Essentially wu-wei can be described as working with the laws of nature (what the Chinese call the Dao) rather than against them. An example of this would be the importance of swimming with a strong current rather than trying to oppose it. In fact the softness yet power of water is a metaphor frequently used by philosophers to describe the concepts of Dao and wu-wei.

It is important to note that the "power" harnessed from nature need not be overt; it may involve simply understanding human motivations and working with them to achieve a goal (in the case of martial arts, to resolve conflict). Sometimes wu-wei may mean utilizing a smile to diffuse a hostile situation. In other cases wu-wei may involve actual combat. Depending on the circumstance, it can involve practically any response.

If you think this sounds a lot like common sense, you may be correct. But wu-wei involves more than the application of mere intelligence: it requires wisdom. It is for this reason that the Academy has adopted the slogan "martial arts for the thinking person".

A frequently asked question about wu-wei


"Wu-wei means "no action" literally. But it should not be read as an instruction. This is a description of an ideal situation, ie. where you have to take "no action" and yet you achieve your desired outcome. In practical terms, the less you have to do to achieve your objective, the more you have utilised wu-wei. In other words it does not, strictly speaking, mean "do nothing". It means "effecting your goal without having to do anything" or letting something develop or flow on its own accord. You don't get very far (at least not easily) by opposing the natural development or flow. You can't hasten it. Instead, a wise person will fully use it to his or her advantage."

The Academy's logo has been specifically designed to reflect our function, origins and philosophy.  Firstly, the fist denotes that the Academy teaches fighting arts.  Note that it is a left fist.  This is symbolic of 2 things: First, it reflects our philosophy that violence should never be a first option.  Second, it depicts the principle that fighting disciplines should develop and  rely upon creative thought and reflex action.

The blue (or alternatively transparent) half of the logo denotes yin  or "softness".  The red denotes yang   or "hardness".  These must be in balance for a technique to be effective.  It is important to note that at no stage is any technique purely "hard" or "soft": in varying degrees every technique has both attributes. This is reflected in the fact that there is a spot of red in the blue/transparent half of the circle and a corresponding blue/transparent spot in the red half.

In the Academy of Traditional Fighting Arts we strive to conduct ourselves according to eight mottoes or "dojo kun" originated by the founder of Goju-ryu, the Karate Master Chojun Miyagi. Note that the original Kun were written in "kanji" (Chinese characters) and that the literal translations below do not do justice to their full meanings: 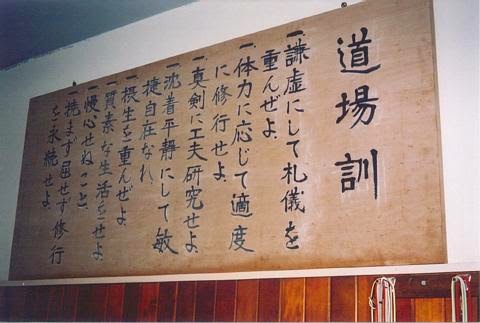