Baguazhang at the Academy 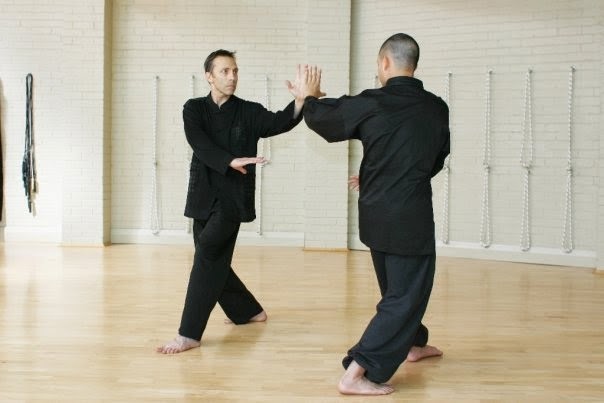 The second of the arts taught as part of the Chen Pan Ling gong fu system is "swimming dragon" baguazhang.

It is one of the 3 principal "internal" or "soft" arts of China (alongside taijiquan and xingyiquan).

There are presently no "bagua-only" classes held by the Academy, largely due to a lack of sufficient demand, however bagua is regularly taught during a portion of the gong fu classes.


Baguazhang (Pa kua chang) or “8 trigram palm” is an ancient Chinese martial arts system that belongs to the internal (neijiaquan or wudang) school.

Baguazhang is said to be a physical manifestation of the Yi Jing (I Ching) – the Book of Changes, one of the ancient Chinese classics attributed (in part) to Confucius and strongly influenced by Daoist(Taoist) thought. Legends trace the origins of Bagua to Tung Hai Chuan (A.D. 1798-1879) who is said to have learned this art from an anonymous Daoist monk in the mountains of Kiangsu province. Shifu Dan's teacher Chen Yun Ching’s lineage (as depicted on the left) traces directly back to Tung via three different sources.

After becoming famous in Beijing, Tung was challenged by Kuo Yun Shen (known as "Divine Crushing Hand") of the xingyi (h'sing-i) school. Legend has it that Tung and Kuo fought a 2 day duel until Tung prevailed. It is said that after the battle Tung and Kuo became friends and agreed to teach each other’s arts. So today it is still common practice for bagua and xingyi to be taught side by side.

Chen Yun Ching’s baguazhang is that researched by his father, the legendary Chen Pan Ling before World War 2. He was the chairman of the Nanjing Institute which was charged with the preservation of traditional Chinese fighting arts in the advance of the Japanese. Because of the depth of Chen Pan Ling’s research from a variety of sources (all pre-War) there is good reason to believe that this is one of the oldest variants of baguazhang in existence.

The structure of bagua

The basic building blocks of bagua are the 8 palm changes. These are movements that contain the essential principles of “change”. In this regard it is important to note that the art of bagua concerns itself not with static postures, nor even particular movements. Rather it concerns itself with understanding the inevitable process of change – how one movement morphs into another.

The Yi Jing (Book of Changes) described 8 different principles of “change” and it is these principles that are manifested physically in the 8 palm changes of bagua.

It is important not to see the 8 palm changes as “techniques” but as a series of movements encapsulating an important principle of “change”. Once you understand these principles you will be able to negotiate your opponent’s changes in movement and be able to control him or her.

In most systems of bagua, the practitioner walks in a circle, then abruptly enters into one of the palm changes. "Circle walking" provides important conditioning for the legs (the circle allows you to cover endless ground without needing a large space) and teaches you important principles of acceleration in stepping. The even height, low-slung walk used in bagua is in this respect the antithesis of ITF taekwondo's "sine wave" theory.

In many schools of bagua this "circle walking" is performed with a characteristic "flat footed" stepping, sometimes called "mud stepping". This stepping is however not used in Chen Pan Ling swimming dragon bagua which prefers a more natural stepping method.

There are myriad possibilities for applications arising from each palm change; so many they are not possible to tabulate. Some schools of baguazhang have quite complex palm changes corresponding to the bewildering turns and twists that characterise those applications. By contrast the swimming dragon baguazhang of Chen Pan Ling is quite sparse; it is stripped back to the basic principles and does not try to capture the exact movement of all the applications.

The Academy sees this as a plus: attempting to re-enact specific applications might seem like a good idea until you realise that the more application-specific your palm changes become, the more circumscribed or limited they are in their scope. It is our opinion that Chen Pan Ling stripped back some of the layers that others added until he retained on the bare principle of each palm change. Each principle can then give rise to the myriad possibilities that characterise the art of baguazhang - without being limited by the form of particular applications. Such was the genius of Chen Pan Ling.

The first palm change is a manifestation of the trigram “qian” or heaven. It is said to embody the masculine (yang).

The second palm change is a manifestation of the trigram “li” or "to adhere". The palm form is "kuo" - to button or hook.

The double palm change expands on the basic bagua evasion by containing additional follow-up movements (ie. it teaches you how to cope with your opponent’s reaction to the single palm change).  It uses "kuo" to penetrate your opponent's defences.

Hawk soars up to heaven

The third palm change is a manifestation of the trigram “zhen” which symbolises great power. The palm form is "ling" or "to lead".  It introduces the concept of cross-body movement – one of the most important principles of bagua. It’s applications alone are almost impossible to quantify.

The fourth palm change is a manifestation of the trigram “kun” which is said to embody the feminine (yin). The palm form is "pi" - to split.  It introduces entering interceptions and attacks that cleverly utilise the full weight of your body.

The fifth palm change is a manifestation of the trigram “kan” or "sinking inward". The palm form is "tou" - "to hold up".  It expands on the second palm change in the way in which it extrapolates the movement of your opponent and follows him or her.

Its applications include arm locks and takedowns as well as projections. This palm change contains the movement known in taijiquan as “fair lady works at shuttles”.

The seventh palm change is a manifestation of the trigram “dui” which is symbolised by a lake or swamp. The palm form is "jin" - "to enter".

Its applications involve a coiling energy that draw the opponent in, and coiled counterattacks.

The eighth palm change is also called “whirlwind palms”. It is a manifestation of the trigram “xun” - "enter like the wind".  The palm form is "ban" - "to move about".

Its movements have the greatest number of applications of any of the palm changes. The “whirlwind” nature of the arm use appears initially to be too expansive for practical use, however it is in fact a “fuller” or “larger” version of countless smaller techniques which include unbalancing techniques, throws, evasions and strikes to vital regions.


As with many bagua systems, Chen Pan Ling swimming dragon bagua features sword and staff forms in addition to its empty hand sets.